Happy New Year to you all! Here's to lots more singing in 2020! #pdtp
Update on the #TrafalgarSquare carols: the money that we collected from our very generous audience has now been counted and it adds up to (drumroll please): £387! Not too shabby for a 75 minute session out in the cold! This doesn't include the euros and dollars donated from our international audience - nor this one pound note from the person who was clearly visiting from the 1970s! (cf https://www.bankofengland.co.uk/banknotes/withdrawn-banknotes) It's a real blast from the past to see one of these and I must admit to some fascination as to how it came to be donated; was someone carrying it around for 41 years waiting to find the right set of carols singers deserving of it? Or did anyone notice a police box in the corner of the square...? Wharever the reason, we're very grateful once again to everyone who gave money in support of @choirwithnoname and to all of you who came along to sing!
Finally, after several months of nothing to Instapost, we have some lovely pics from Monday's epic session at #TrafalgarSquare, in which we sang traditional Christmas carols interspersed with seasonal motets and chorales by Bodenschatz, Praetorius, Victoria, Hassler, Palestrina, Forster and Bach. We were lucky to have a huge crowd listening and singing along, despite the cold weather, and they generously showed their appreciation by donating lots of dosh for the wonderful @choirwithnoname. Thanks to all who gave up their time to join us and thanks too to D. Koopman and S. O'Neill for the great photos! #Christmas #carols #TrafalgarSquareCarols

Unless you’ve been living in a hermetically sealed nuclear bunker for the past month (to be fair I can understand why you might have been), you’ll know that tomorrow is our May Day Madrigal Special.

As the madrigal has never been a musical form close to my heart, I had to do fair bit of extra research to come up with the setlist. Luckily, as a current student at the excellent Morley College (I’m studying Period Corsetry of the 19th Century*), I have access to the college library’s extensive collection of music scores, including a vast array of madrigal editions.

Now, all you madrigal maniacs will be familiar with the work of the Reverend Edmund Horace Fellowes and his significant contribution to the 20th century rediscovery and appreciation of English Reniassance composers through his books and his performing editions of the English Madrigal School for Stainer & Bell.

Morley College’s library has a large number of these S&B volumes so I got stuck in to them in order to find material worthy of your time on a bank holiday Monday.

It wasn’t just great music that I discovered when going through these scores; have a look at the date stamps on this collection of madrigals by Bateson: 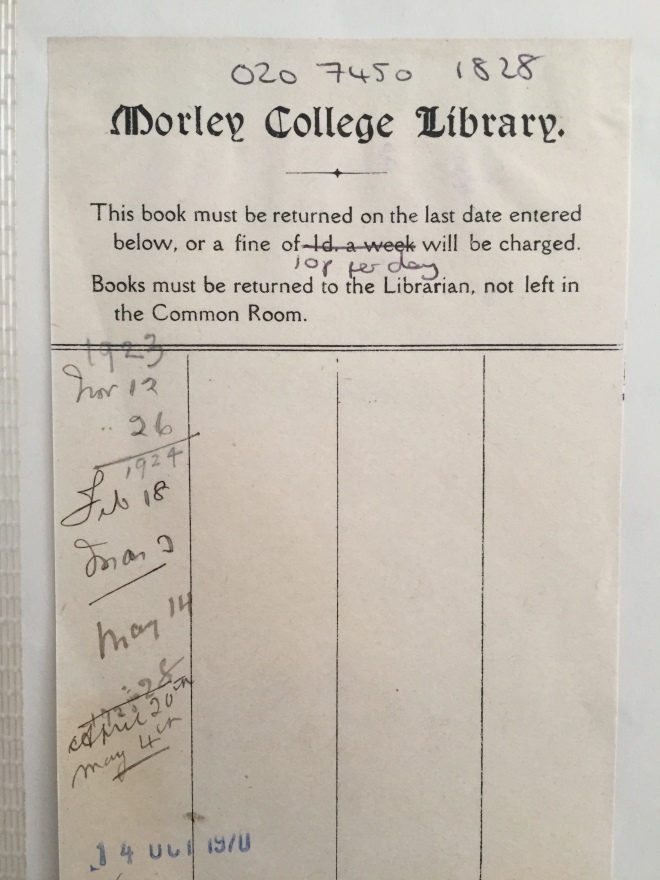 1923 was when it was first borrowed! 1923!!! I found this fact to be lovely enough in itself, as it makes a small but real connection between our little singing project and music-makers from the distant past.

But then I remembered that Morley’s Director of Music at that time was none other than Gustav Holst, whose many lectures and concerts with the Morley College Choir often focused on English Renaissance composers.

With a lot of help from Morley’s archivist and librarian Elaine Andrews, I discovered that the Fellowes editions were donated anonymously, incuding a number of them in 1922:

Who donated the scores to the library? And were they used by Holst or some of his singers in preparation for one of their concerts? Certainly he was an admirer of the Fellowes editions, as related by Imogen Holst in her biography of her father:

Whether or not there is a direct connection between the scores and Holst himself will need to be left to a more skilled researcher than me but for the moment, let’s enjoy this reminder that we belong to a wonderfully long tradition of singing Renaissance music in Waterloo.

If you’d like to join us at tomorrow’s madrigalfest (we’ll be singing works by Bateson, Pilkington, Wilbye, Arcadelt and even Palestrina), there’s still room for a couple of sopranos and tenors; altos and basses, join the waiting list as we may be able to squeeze you in.

*I’m not actually studying corsetry but you can, along with many, many other fantastic courses that Morley College offers at a very reasonable cost.

2 thoughts on “Touching a little bit of choral history?”